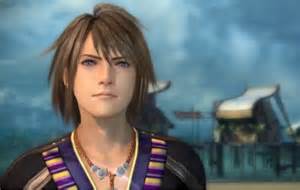 In Final Fantasy XIII-2, Noel is the last remaining human from 700 AF and has traveled into the past hoping to change his fate. After meeting Lightning in Valhalla, he accompanies her sister Serah on her quest to reunite Lightning and change the future.

In Lightning Returns: Final Fantasy XIII, Noel is called the "Shadow Hunter", and acts as an adversary for Lightning as she fights to save the souls of humanity before the end of the world. it should be also noted  on the  final day  he did  sided with Lightning  and  help to  beat the true  villian in Lightning returns  to save  Serah 's   soul  from being erased

Retrieved from "https://bloom-and-daphne.fandom.com/wiki/Noel_Kreiss_aka_the_hunter_or_Shadow_hunter_(in_lightning_returns)?oldid=6060"
Community content is available under CC-BY-SA unless otherwise noted.